Who will you meet

The conference is intended for general professional public, representatives of state and public administrations, professional and academic communities, directors general and chairmen of boards of directors, designing and construction companies, designers, architects and fans of rail transport.

Award „Personality of Railway and Urban Rail Transport in Slovakia“ 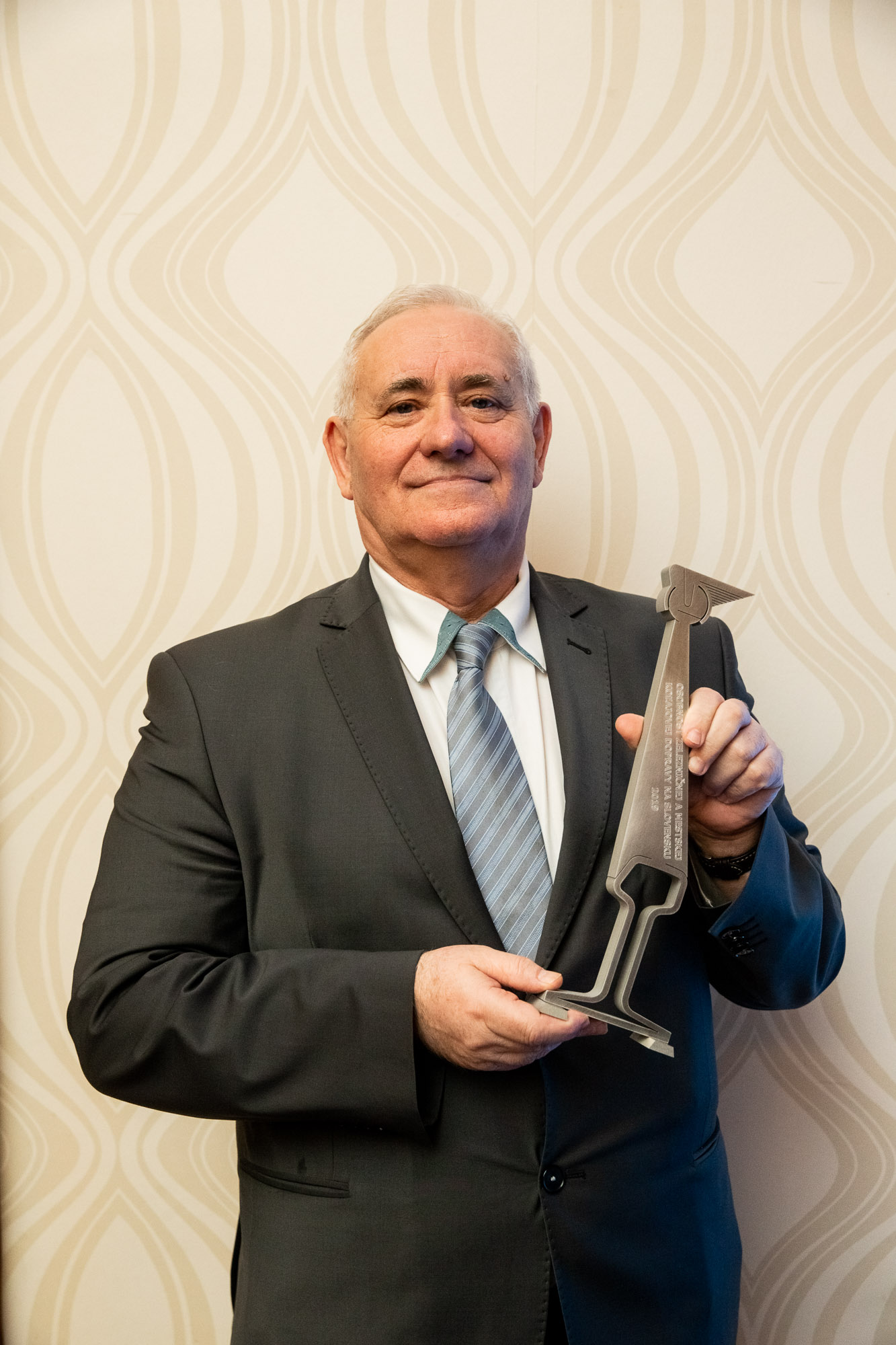 The winner of the award "Personality of Railway and Urban Rail Transport in Slovakia for the Year 2018" became Prof. Ing. Josef Vičan, CSc. 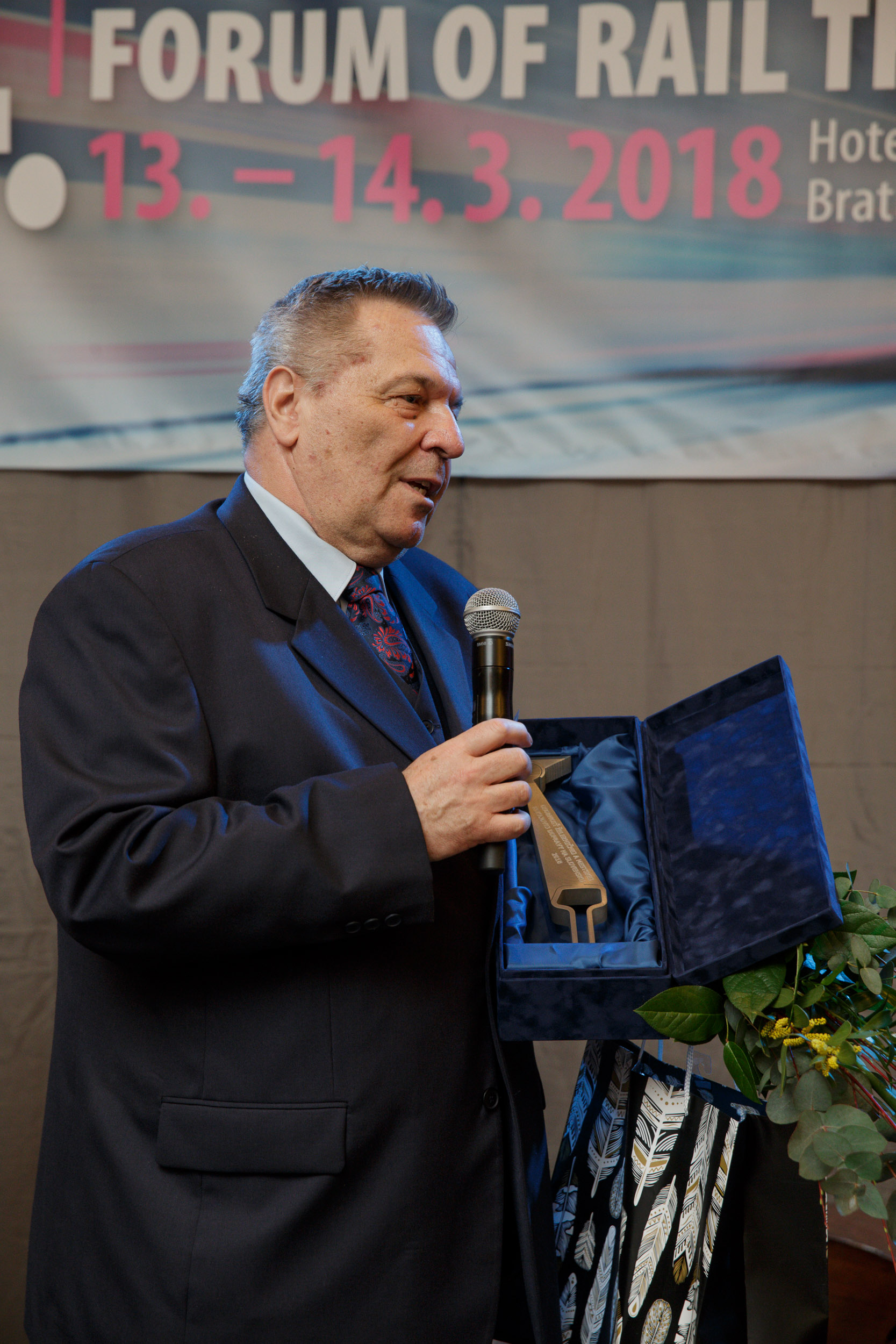 The winner of the award "Personality of Railway and Urban Rail Transport in Slovakia for the Year 2018" became Ing. Bronislav Weigl.

His professional and personal passion is fully demonstrated at solving his tasks, performing work and other professional activities. He knows to show his individual abilities also within team work, where his natural leaderships skills excel. 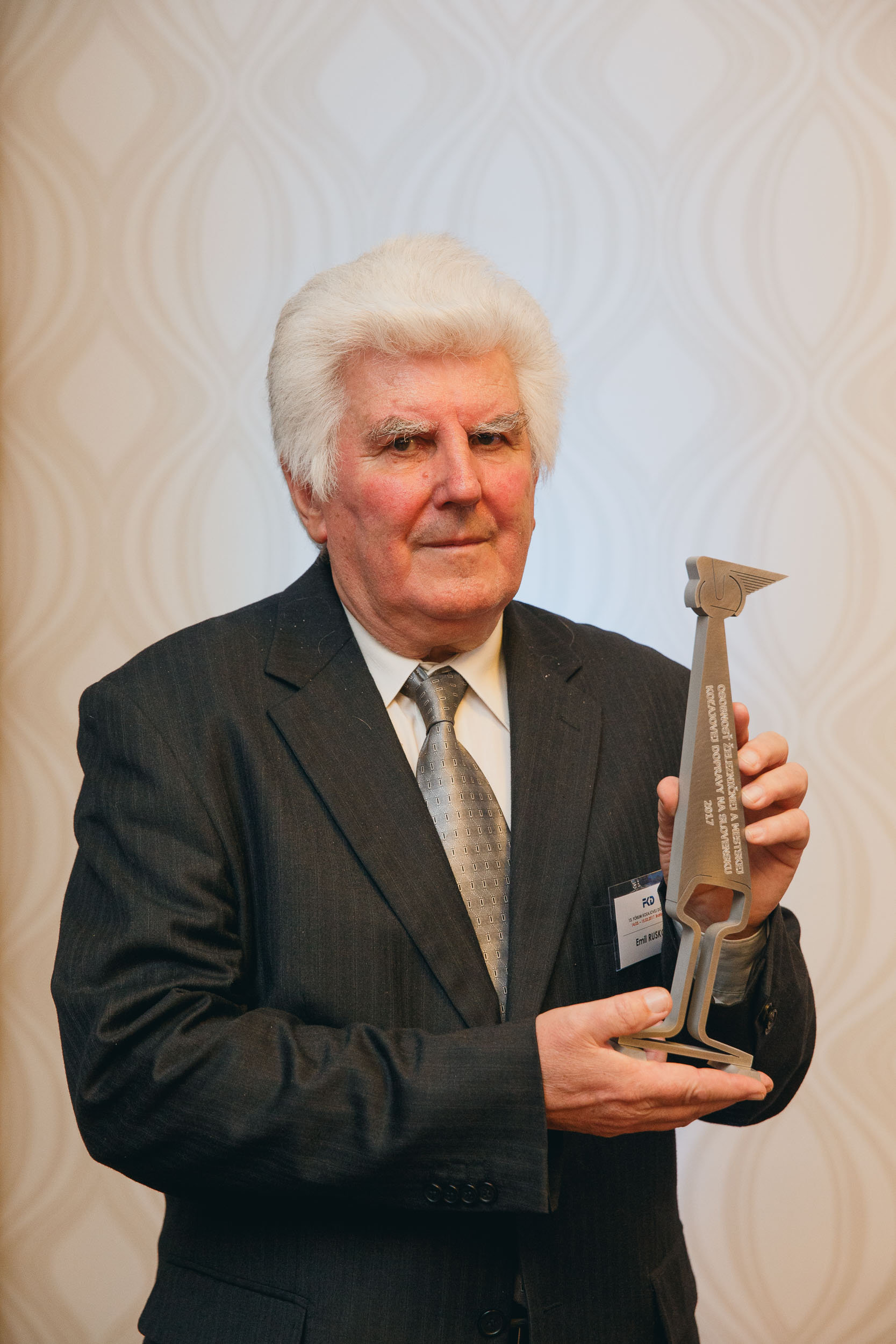 The winner of the award "Personality of Railway and Urban Rail Transport in Slovakia for the Year 2017" became Eng. Emil Rusko.

Eng. Emil Rusko was born June 6th, 1941 in Skalica. He graduated from Civil Engineering Faculty of University of Technology in Bratislava – focused to transport engineering in 1965. In 1972 he finished postgraduate studies in the field of the steel structures. After finishing of university studies in 1965 he joined the design and construction department of Mostárne VSŽ in Košice, where he worked at various positions – from designer to head of section – until cancelling the design section in 1999. He mostly devoted to the steel structure design of industrial and bridge constructions. During that period he led and participated on the design, production and construction of more than 30 bridge structures – mostly railway bridges (bridges across the river Váh in Žilina and Trenčín, bridge across the river Hornád in Kysak, Dluhonice connection, Praha – Vršovice, Čoltovo, Jablonov, Bratislava – Pánlenisko, Holíč, Prievidza, Zvolen, ...). Some bridge designs were awarded in competitions organized by the ČSVTS (Czech and Slovak Science and Technology Society) for the best steel structure. For the implementation of the steel structures of BAZ factory complex – Devínska Nová Ves he was awarded by the BAZ Builder plaque. After he left VSŽ (East Slovak Ironworks Company) he participated on the development of steel structure designs of smaller constructions within the modernization of railway track Čadca – Žilina. He worked closely with technical department employees of the railway administration, bridge district and design company SUDOP. During professional seminars and in conference proceedings he regularly informed about design, production and construction of steel bridge structures produced in VSŽ. He co-operated as a teacher, head and opponent of diploma theses and as member of the commission for the state final examinations with Civil Engineering Faculties in Košice and Žilina. Within the work in TK 15 – SÚTN (Slovak Office for Standards, Metrology and Testing) he participated in the introduction of Eurocodes in field of structure load. Currently he works as authorized civil engineer in the field of structural analyses and transport structures. 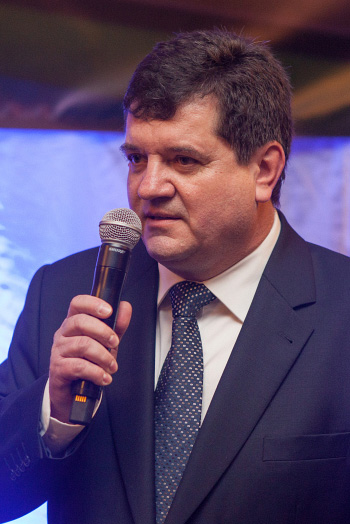 The winner of the award "Personality of Railway and Urban Rail Transport in Slovakia for the Year 2016"became Eng. Jozef Veselka.

Eng. Jozef Veselka completed his university studies in the year 1986 at Slovak University of Technology in Bratislava, Civil Engineering Faculty. In the same year he entered the ČSD – Správa východnej dráhy (Czech and Slovak Railways – Administration of East Railways), where he started as assistant at Investment Department at Investor Section Nové Zámky. Within his career he has hold various positions at the Investment Department. In the years 1988 - 1992 he worked as independent professional technician and later as senior professional technician. In 1993, after the organizational changes at the Slovak Railways, he worked as a technician at Directorate of ŽSR and since 1996 as a system specialist at Investor Department of Directorate General of ŽSR. From 1.12.1999 to 30.11.2006 he hold the position as Head of the Preparation and Implementation Centre in Bratislava. 1.12.2006 was Eng. Veselka appointed as director of Investor Department of ŽSR. In 2009-2010 he became Deputy Director of Investor Department of ŽSR and for a short time he also hold the function of Deputy General Director for Development and IT of ŽSR. 27.4.2012 he was appointed as Deputy General Director of Directorate General of ŽSR for Development and IT. He holds this position up to day. 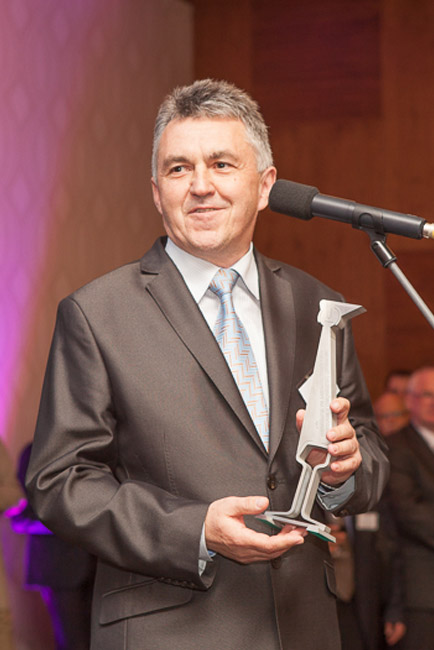 The winner of the award "Personality of Railway and Urban Rail Transport in Slovakia for the Year 2015"became Eng. Daniel Maruniak. 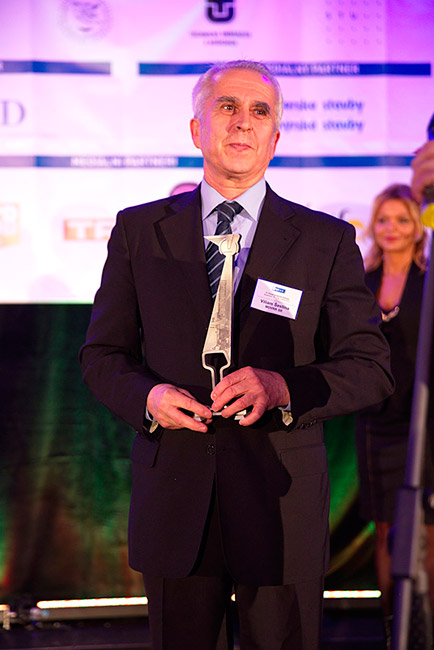 The winner of the award "Personality of Railway and Urban Rail Transport in Slovakia for the Year 2014"became Eng. Viliam Šestina.

In 1979 – 1994 Mr. Šestina worked in Dopravný podnik Bratislava (Transport Company Bratislava) as senior technologist, later technical deputy of electric traction director, head of production and techniques, technical deputy of branch electrical lines and deputy of traction line administration section. During his work in Dopravný podnik Bratislava belonged Mr. Šestina to the mainstream staff in the technical area. He was considered to be the leading expert in the tram transport area within the professional groups of MHD companies (public transport companies). His foreign contacts enabled to apply progressive technologies in the public transport vehicles; he also supported and tested various technical innovations.

Since 1995 he worked in Výskumný ústav zváračský (Welding Research Institute), later in URŽD (Office for Regulation of Railway Transport). Currently he works at the Ministry of Transport, Construction and Regional Development, section on railway transport as a state adviser. Eng. Villiam Šestina has devoted and still devotes to tram modernization and technical development of urban rail transport. The professional public has remarkable respect for his wide technical, legislative and operational knowledge. His consultations are irreplaceable during solving complex and conceptual projects. 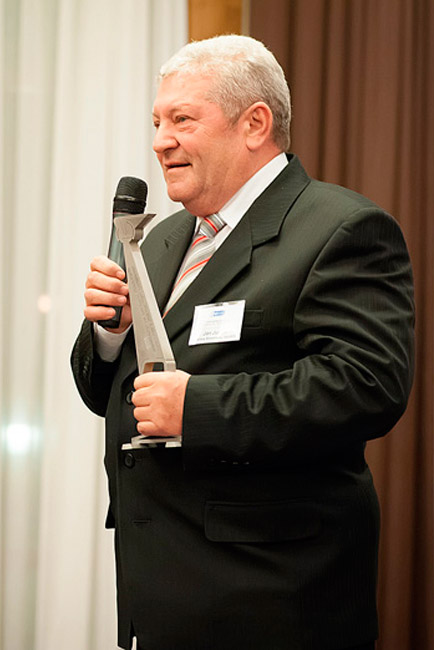 The winner of the award "Personality of Railway and Urban Rail Transport in Slovakia for the Year 2013"became Eng. Ján Juriga.

Eng. Ján Juriga graduated the University of Transport in Žilina, Faculty of Transport Operation and Economics in 1976. The nominee has been loyal to railways since 1977. Gradually he worked at railway stations Vígľaš, Hronská Dúbrava, Zvolen, Zvolen PO, Lučenec, Fiľakovo first as train dispatcher, station dispatcher, senior technician of rail transport and later as deputy chief of transport, chief of station, deputy chief of section O 11 and the stationmaster. After 1993 he worked in PR Zvolen and SRD Zvolen as head of transport routes section. In 1998 he became deputy director for operations in DDC Bratislava, and in 2000 he returned to SRD Zvolen as manager. In 2004 he became director of the Regional Directorate of Košice. Currently, he is deputy general director of ŽSR for operation.

At the occasion of the National Railwayman Day in 2010 he took over the highest departmental honour from the Minister of Transport, Construction and Regional Development "Honour of the Minister of Transport" for remarkable contribution, creative inventiveness and hard work.
Mr. Ján Juriga was already nominated in last year's award "Person of the Raiwayl and Urban Rail Transport for 2012." 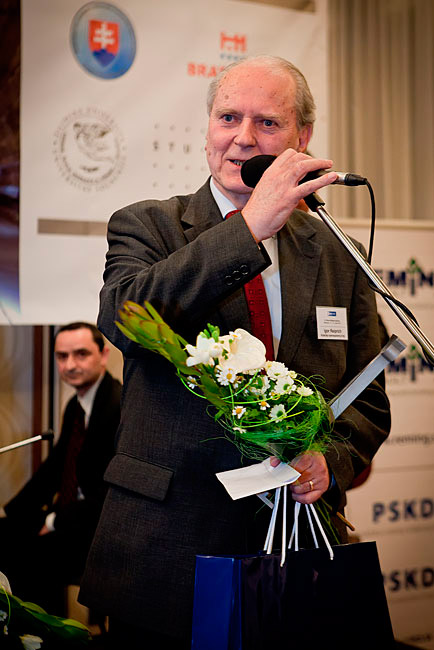 The winner of the award "Personality of Railway and Urban Rail Transport in Slovakia for the Year 2012"became Eng. Igor Reiprich, CSc.

After studies at the University of Transport in Žilina in the field of Rolling stock operation and maintenance, he worked in Východoslovenské železiarne Košice (East Slovakian Ironworks, Košice) – transport plant. In 1975 he joined the Transport Company of city Košice as director. In the years 1986-1989 he worked in the National Committee of Košice. And in 1989 he was again appointed as Director of the Transport Company of Košice. He retired in 2005.

He was one of founders of the Federal Association of Transport Enterprises of the former Czechoslovak Republic and after 1993 one of founding members of the Association of Operators of Public Passenger Transport in Urban Areas in SR and at the same time its first chairman from 1993 until the end of 2004. His personal merit is that the Association was soon accepted in the field of development of public passenger transport in providing public services by the central government authorities especially the Ministry of Transport, Posts and Telecommunications.

It is important to mention his technical cooperation at the level of science and technology, mainly his cooperation with the University of Žilina, Transport Research Institute, and also with the Technical University of Košice.
Mr. Reiprich was also one of nominees at the first year of the award. 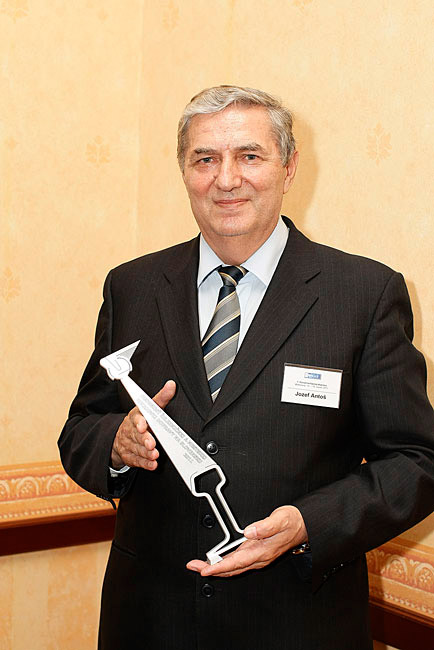 The winner of the award "Personality of Railway and Urban Rail Transport in Slovakia for the Year 2011"became Eng. Jozef Antoš.

He began to work on the railways in 1966. In the early years, he served as dispatcher in railway stations Kapušany, Púchov and Žilina. Later he became train dispatcher of operation section Bratislava. In 1979 he returned to the railway station Žilina, where he was appointed as engineer of railway transport, deputy chief for transport and finally stationmaster.
In 1984 he was appointed as chief of Operation Section Bratislava and later director of Operations Directorate Bratislava. In 1995-1996, he was Deputy Director General ŽSR for the transport route and in 1996-1998 he became general agent of ŽSR in Warsaw. After returning from Poland he was appointed as deputy head of Traffic Management Administration Trnava. In 2006 he became Deputy General Director of ŽSR for operation. 31.1.2011, due to the retirement, ended his more than 44 years work on the railways. He significantly contributed to the safe operation and development of rail transport in Slovakia with his professional approach, exemplary and responsible work, and with his work commitment during his tenure.
His advantages have always been excellent management and organizational skills, conceptualisation, communication skills, solid moral principles and professional maturity. Its involvement in management positions at the Slovak railways, as well as the general representative of Slovak railways in Poland, significantly contributed to the improvement, expansion and streamlining cooperation with foreign railway administrations.